“They were right on the radio. Don’t panic: ‘The authorities will impose all measures necessary’.” (February 1982)

Between “August and September of 1969, Charles M. Schulz devoted a few weeks’ worth of strips to Snoopy’s novel.” In 1981, Len Wein wrote a Batman “two-pager with art by the great Walt Simonson. The story has no dialogue. It only has captions. The captions? All lines from the aforementioned Snoopy novel!!” Brian Cronin, Comic Book Resources, 2010.

“It was the first time I had had my mind blown. Sitting on that couch, I felt time extend infinitely backwards and forwards, with a sense of all the biggest of small moments in between. And it wasn’t just my mind: “Here” blew apart the confines of graphic narrative and expanded its universe in one incendiary flash, introducing a new dimension to visual narrative that radically departed from the traditional up-down and left-right reading of comic strips. And the structure was organic, nodding not only to the medium’s past but also hinting at its future.” Chris Ware, The Guardian, December 17, 2014 (see below for link to the article). 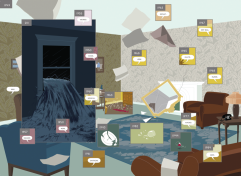 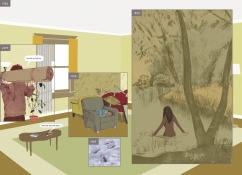 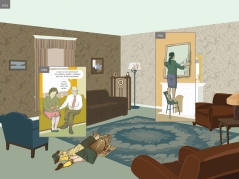 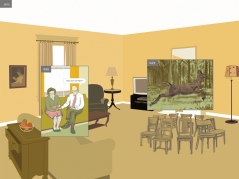 A few pages from the 2014 version of Here (by Pantheon Books) and Chris Ware on Here by Richard McGuire – a game-changing graphic novel (for The Guardian).

An interesting adaptation of the original six pages of McGuire’s Here into a short film (“about a series of events in time that happen in one point of space: the corner of a room in a normal house”). Student-produced at the RIT Dept. of Film & Video in 1991, by Tim Masick and Bill Trainor for their senior thesis project.

And an interesting GIF of Richard McGuire’s complete original version of Here.