With a first draft submitted on the 31st of January 2017 and a final draft submitted on the 21st of June 2017, the report of my 13-month scholarly research project Thai Comics in the Twenty-First Century: Identity and Diversity of a New Generation of Thai Cartoonists (การ์ตูนไทยในศตวรรษที่ 21: อัตลักษณ์และความหลากหลายของนักเขียนการ์ตูนไทยรุ่นใหม่) first introduces the reader to an overview of the History of Thai Comics from the early 20th Century to the 1990s, and then proposes an in-depth analysis of the evolution of the Thai alternative and independent comics scenes from the launch of Joe the Sea-Cret Agent alternative comics series by khun Suttichart Sarapaiwanich in 1998 till the latest development of the market in 2016. The last third of the 216-page report displays answers by 16 contemporary Thai cartoonists to a survey consisting of 105 questions (curriculum of the cartoonists; considerations on Thai comics; Thai comics industry and the professional situation of the respondents in the Thai comics market; influence of Thai comics and Thai cartoonists on their own works and styles; influence of foreign comics, foreign cartoonists and other creators on their own works and styles; inquiries on miscellaneous topics). This research was supported by the Faculty of Communication Arts Research Funding, Chulalongkorn University. The full report is available at Chulalongkorn Libraries in both hard and soft copies; more info here.

First page of the Table of Contents of the Research Project “Thai Comics in the Twenty-First Century: Identity and Diversity of a New Generation of Thai Cartoonists” 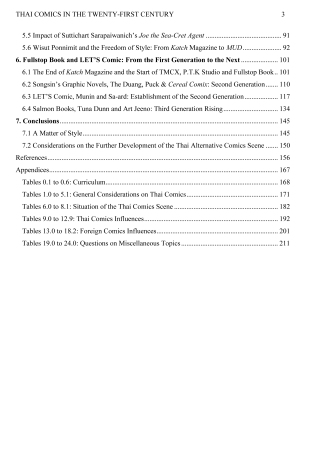 Second page of the Table of Contents of the Research Project “Thai Comics in the Twenty-First Century: Identity and Diversity of a New Generation of Thai Cartoonists”

The second chapter, dedicated to Thai master cartoonist Prayoon Chanyawongse, was developed into a scholarly paper presented below.

Abstract:
“By launching in 1938 a series of adaptations of folktales in comics form, Thai cartoonist Prayoon Chanyawongse established the Cartoon Likay genre which places the reader as a member of an audience attending a Likay performance. The local theatrical form frames his graphic narratives where scenes of a play performed on a stage continuously alternate with sequences taking place in the vast realms of epics set in the Ayutthaya period. By introducing key Likay conventions such as recurring humorous interruptions and asides, Chanyawongse could effectively address contemporary social issues and political topics within traditional folktales. This paper explores several Cartoon Likay narratives in the context of the Likay theatrical form and the local folktale repertoire to discuss the nature and development of Chanyawongse’s signature comics genre.”

Full paper is available in open access on this page of The Comics Grid: Journal of Comics Scholarship.