One of the main creative assignments of the “Imaginative Communication” course [a Comparative Media course in which we explore the theme “How to Tell the Unutterable” by analyzing and comparing the depiction of Psychic Trauma in various visual media, from comics to animated & live-action movies, tv series or choreographies] is for the students to compose and produce a group performance based on refugee narratives. After visualizing refugees’ journeys graphically [see previous assignment “Refugee’s Grid and Gestures“], watching some related footages [Charlie Chaplin’s 1916 The Immigrant, Wilfredo Rivera’s immigration choreography The Golden Bird Cage, or PositiveNegatives’ animated zoom-comics North Star Fading], reading/watching comics and webcomics [Shaun Tan’s The Arrival, Marc Ellison and Didier Kassai’s immersive graphic novel House Without Windows, or our former students’ refugee comics dice], discovering refugee installations [architect Mohamad Hafez’s multi-media installation Unpacked] and analyzing and comparing Marjane Satrapi’s graphic novel and animated feature Persepolis, students were asked to compose a live pantomime performance of 3′ to 5′ [depending on the number of team members]. The constraint was that their refugee characters had to remain silent, voiceless, muted by the trauma, unable to speak the language of their ‘host’ country, or fearing to speak their own language and have their illegal/foreign status revealed.

Due to the COVID-19 crisis and while productions were well underway, performances couldn’t be presented live anymore for obvious safety reasons. Early March, students were asked to film and edit their performances as video footages so that their works could be screened online. On Wednesday March 26 in a virtual classroom, our 40 students introduced and displayed their video performances which were evaluated and commented by songwriter, performer and former [Performing Arts] CommArts student, Namtarn Jinwara (KhopKhunKhrap!) and yours truly.

I am really proud of these works, sometimes created under unexpected COVID-related logistic constraints. The brave team of exchange students -while scattered throughout the world to reach safely their native countries- managed to create an imaginative piece on their way home or while held in quarantine facilities… Below, you can discover film stills from the students’ projects, but also some of the actual performance videos. Here are the numerous choreographies, but also some creative short drama films, which sadly -and timely- echo the ongoing and future displacements of refugees caused by Climate Change, COVID-19 and other crises. Ajarn Nicolas Verstappen

Namtarn’s comments and mine were usually revolving on issues of clarity and meaning. Some performances could have been made more engaging and relatable through the narrative and recurring use of simple objects [as in the Dardenne brothers’ films] or indentifiable gestures developed as motifs. Another point was the lack of “feeling of space” which might be a crucial element in refugee narratives (belonging, borders, in-between…). Most performers move through wide empty rooms and one reason is, of course, related to COVID-19 constraints: most teams couldn’t find a safe, fitting and available location for the shooting. Yet, as we discussed during the session, there were some simple options. I mentioned the German Expressionist films‘ painted set designs which could be emulated with some black and white paints on cardboards.

Another reference provided was the set design of Lars von Trier’s 2003 feature film Dogville. Bold white lines on the floor may end up being quite effective. 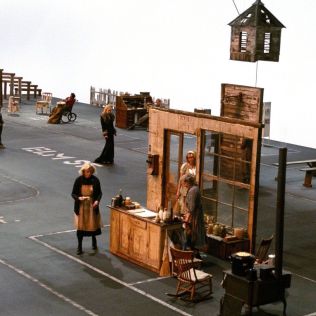 Questions were also raised about production as I felt some works were slighlty too slick, sometimes missing the roughness of the refugee experience. On the other hand, some students were concerned that the quality of their videos had been impaired by production problems caused by the COVID crisis. I mentioned that improvisation and DIY approaches actually benefited the production; and I mentioned the DIY aesthetic of French director Michel Gondry on numerous music videos and movies, and mostly his lesser-known 2008 Be Kind Rewind feature film. Some excerpts were screened: The Chemical Brothers’ Let Forever Be MV, The White Stripes’ The Hardest Button to Button MV,  Massive Attack’s Protection MV or Björk’s classic Bachelorette MV.

As a conclusion, I mentioned that all performance videos had a grim and dark tone and that other approaches were possible. Thinking about a Martin Parr aesthetic, I mentioned Dario Fau’s colorful and caustic music video Dégueulasse by Caballero and JeanJass. But all in all, I’m a #ProudAjarn, as I was so impressed by the involvement and dedication of my students on this meaningful project in a time where the fate of refugees is even more thrown into jeopardy, and invisibilized in the main news outlets. Ajarn Nicolas Verstappen